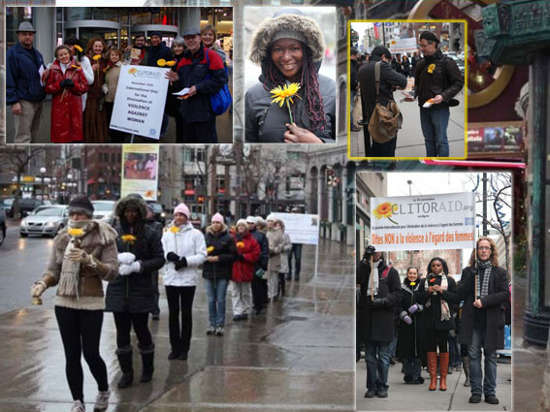 People around the world will support UN Secretary-General Ban Ki-moon’s ‘UNiTE to End Violence against Women’ campaign, but each and every year another three million young girls have their sexual organs cut out by the horrific tribal practice known as Female Genital Mutilation (FGM).

Since 2007 Clitoraid, the international charity dedicated to opposing FGM, has supported this important day.

«All human beings are born free and equal in dignity and rights», first article of the Universal Declaration of Human Rights. This should included “The ‘right of the body’ declared Sylvie Chabot, head of Clitoraid-Canada, meaning that the integrity, dignity and autonomy of their bodies should not be violated against their will. Obviously, performing FGM on innocent young girls is totally contrary to all human rights.”

Indeed, the World Health Organization (WHO) reports, ‘some 165 million women and girls worldwide are living with the consequences of FGM.’ About 92 million of these live in Africa, but with increased immigration in recent years this practice has now spread to the west.

Clitoraid is a private non-profit organism founded in 2006 following an idea launched by Raël, spiritual leader of the Raelian Movement. The principal goal of this organization is to raise funds to help african women by allowing them to choose to have inexpensive surgery that repairs the mutilations, restores physical pleasure.
Chabot explains, “Dr. Pierre Foldes, a French surgeon of Hungarian origin, developed this surgical procedure, commonly known as FGM Reversal, 25 years ago. He then taught it to many doctors world wide. Together these remarkable surgeons are, thanks to science, able to help FGM victims to recover their dignity and pleasure.”

Clitoraid has responded to this challenge by raising over US$300,000 to construct a small surgical hospital dedicated to FGM reversal near the town of Bobo Dioulasso in the central West African country of Burkina Faso. Komkasso Hospital, meaning ‘the women’s house’ is nearing completion and, if funding can continue to be raised, should open in 2013.

“It doesn’t matter whether people contribute much, what counts is their determination, according to their means, to help these women and to end this barbaric practice and to allow these cruelly treated women to experience the pleasure that should always have been theirs,” concluded Sylvie Chabot.

In order to oppose firmly FGM, rape, wife beating and all other forms of violence against women,