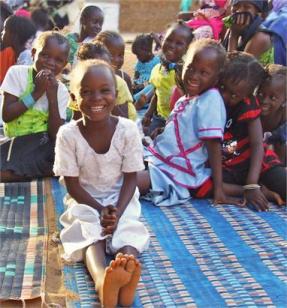 By Abibata Sanon, coordinator of Clitoraid in Africa

Clitoraid volunteers in Gabon and Burkina Faso have mobilized in support of the international day of struggle against FMG on February 6. Events were organized to promote the cause and inform people about the Hospital Kamkaso (Pleasure Hospital).

In GABON, the actions lasted a week, from Saturday 4 to Sunday, February 12. The first day, volunteers went to the big market of the city of Libreville, where large crowds of citizens of West Africa practice circumcision. They held placards claiming "No to FGM", "Yes to Science" or "Yes to the restoration of the clitoris," they distributed information leaflets to passersby who approached to ask questions. Some even wanted to help promote the cause. In total, more than 500 flyers were distributed specifically to women. During this week of action, Clitoraid team was invited to participate in three national and local media, including the broadcast of Zero FGM on Africa No. 1. They were able to transmit messages that are so dear to the heart to all the volunteers of the association: the fight against FGM and the promotion of the Pleasure Hospital.

In BURKINA FASO, volunteers noticed that the population showed great interest for the cause of Clitoraid. The actions began Saturday, February 4 and have been constant to this day.
- In Ouagadougou, four brothers and sisters braved the dust storm that reduced visibility to bring news to the townspeople of this wonderful restoration technique of the clitoris.
- In Bobo, a dozen volunteers toured the city to raise awareness on the consequences of FGM and the hope carried by the final phase of construction Kamkasso Hospital.Two wonderful sisters have registered to be restored and offered their help to promote the cause.
الرجوع للتصنيف   الرجوع لعرض كل الأخبار
خبر أقدم
خبر أحدث