The famous women's rights activist, Eve Ensler is at the origin of the event One Billion Rising. This is what she has to say about it: "It is the beginning of the new world ignited by a new energy. It is not the end of a struggle but the escalation of it. NOW is the time to enact change. This is NOT an annual holiday, we are not waiting until 14 February 2014. NOW is the time to harness the power of your activism to change the world!"
Rael, spiritual leader, who inspired the foundation of Clitoraid in 2006 and all of the Clitoraid volunteers from all faiths and walks of life embrace Eve's thought and rise around the world every day of their life to help eliminate FGM and heal genitally mutilated victims. 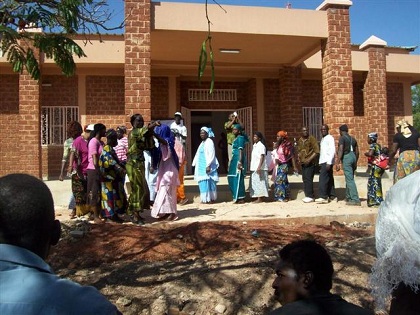 In the outskirts of the small town of Bobodioulasso, Burkina Faso, Clitoraid's Pleasure Hospital was the site of a grand One Billion Rising event where women from many surrounding towns came to dance and stand up against the most despicable violence done to a female child: Genital Mutilation. 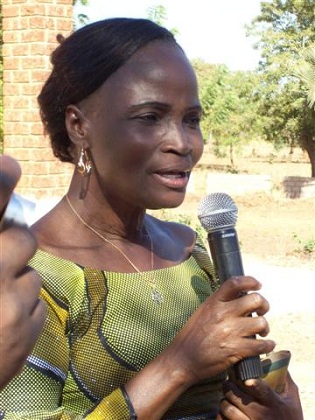 They were warmly welcomed by Banemanie Traore, a former victim of FGM whose genitals have since been surgically repaired and who has been keeping a caring and watchful eye over the progression of the Pleasure Hospital since it started being built.
The Clitoraid Burkina Faso team sent Press Releases about the event and local TV's came for interviews and to visit the hospital that is due to open its doors in October 2013.
Around 1PM, women began to arrive in small groups. At 2:30, the ceremony began with a speech from Ms. Traore, head of AVFE (as Clitoraid is legally known there). She addressed the pain of living with FGM and the life threatening dangers of practicing this tradition. She invited everyone to work for the elimination of violence done to women and to cultivate femininity and love for self and others.
Then Dr. Sie Benoit invited all the women who had suffered from FGM to place their name on Clitoraid's surgical waiting list and be able to benefit from the free Clitoral Repair Surgery once the hospital opens in a few month.
The musicians and their drums started to sound in the background until the music became center stage and everyone began to rise and dance. Visits of the hospital were later organized. Happiness and hope could truly be read on everyone's faces.

A group of 15 women and men Clitoraid representatives led by Lia Steinman gathered on Fremont Street on the evening of Feb 14 to partake in a dance performance prepared by Olivia Jane, an Art Student from UNLV who wanted to stand up for One Billion Rising in a special way. Olivia's group was named Not Just A Beaver. She asked all those participating in the dance to wear white sexy clothes and to perform a dance routine she had created on the music "Crash". 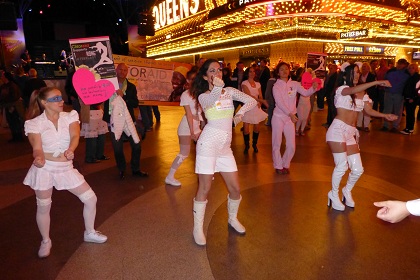 She wanted women performers to be in sexy outfits to stand up against our cultural subconscious that certain aspects of a woman's appearance may somehow legitimize rape or violence.The Clitoraid group and those invited by Olivia like Yasmina Chavez began the performance in the middle of the street and attracted much attention as they stood up against violence in their sexy public performance. Some men from Clitoraid, wore skirts to support the women's cause and held signs that said “ An Outfit is Not an invitation for Rape!”, echoing Eve Ensler's famous line in her Vagina Monologues play "my short skirt is not an invitation for rape". 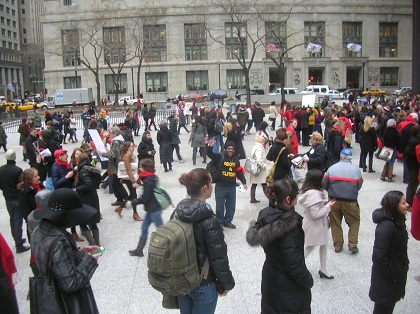 Larry Abdullah represented Clitoraid at the One Billion Rising event in Chicago which took place at the Daley Center, downtown Chicago. This Center is a common rallying point for protests, group marches, and the like. Larry arrived there about 30 minutes before the crowd had assembled clad in his "Adopt a Clitoris" tee shirt and a red scarf. Walking among the growing crowds of people that had begun to assemble. he distributed a handout of the two latest press releases from the Clitoraid web site: On one side was the report of "Clitoraid's head surgeon to perform clitoral repair surgery ... in conjunction with One Billion Rising movement; and on the other side, "Clitoraid supports One Billion Rising ...". The tee shirt and logo proved to be a popular combination. As he mingled through the crowd, many people asked to pose with him for a picture. Though some found the logo catchy and humorous, most were well aware of its well-intended reference and genuinely pleased to learn of the surgical procedure to repair the harmful effects of female genital mutilations. On this wintry day in Chicago, Larry danced through the afternoon with random groups of ladies obviously filled with excitement and joy to be there as a part of the One Billion Rising protest. 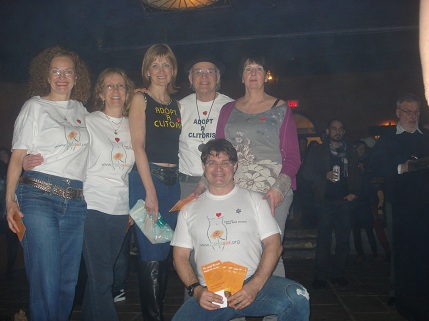 Toronto, Canada
The six Clitoraid representatives led by Diane Brisebois happily joined the celebration; they learned to dance Groove and enjoyed listening to many great speakers present that evening, including Olivia Chow and Jack Layton’s son from the New Social Democratic party who spoke out to end the violence against women. Mehrak Mehrvar an Iranian woman who is part of the group of organizers welcomed the Clitoraid delegation with wide open arms. She was very pleased with our support. Clitoraid flyers were handed out and everyone had a great time! 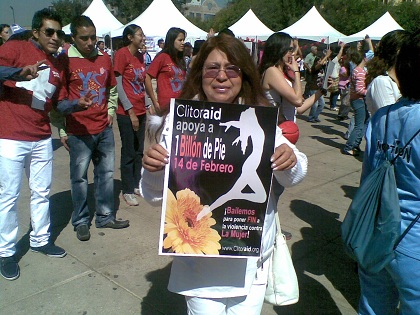 The Clitoraid group in the city of Mexico joined a crowd of 10,000 people present at One Billion Rising in the center of the largest city on Earth. They had brought Clitoraid posters to let the public know about our cause and began to join everyone in the dancing with much happiness. National News Station, Project 40, TV Azteca and Televisa asked the Clitoraid leader a few questions and did a close up of Clitoraid's poster. Clitoraid wishes to thank Carlos Damasco and Aida Fernandez for their participation. 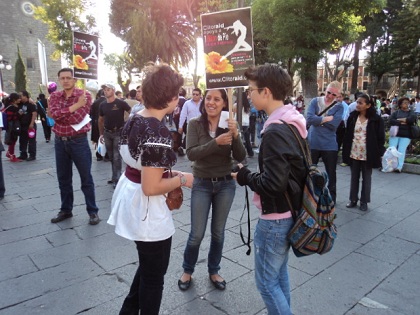 In the city of Pueblo, a young lady by the name of Cynthia accompanied by her father, Beny and a friend Alvaro made their way to the town square to join all the other organizations who supported One Billion Rising and dance with them. As soon as they arrived, the signs they carried caught the attention of 2 TV stations and invited Cynthia to speak about Clitoraid and why she supported it. 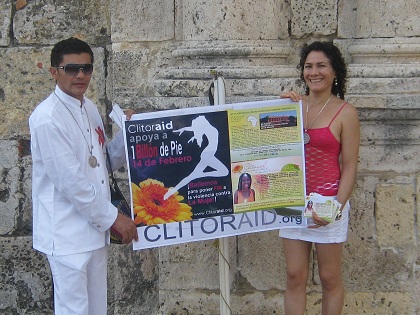 The Colombian Clitoraid group, led by Ruby supported One Billion Rising by standing in a popular and touristic place near the beach with catchy signs which the group's graphic designer, TJ Lucifer created for the occasion. The local media was alerted to this event that was part of a larger international effort to end violence against women by Press Releases that were sent sent out. Colombia is one of the only countries in South America where FGM takes place. Indeed, the small Embera Tribe still cuts the genitals of the little girls in that community when the baby girls are born.
During the afternoon of the event, people came by to read the signs and to chat about the Clitoraid cause. Two women tourists walked to the Clitoraid group and informed them that in Bangladesh, FGM was also performed. A gentleman, who was not aware of Clitoraid's purpose, asked jokingly: "Clitoraid? What sort of drink are you promoting here?" - to which Clitoraid representative, Angel Xue immediately replied "the drink of pleasure!". Towards the end of the afternoon, a man from the University of Cartagena stopped by and invited the group to promote Clitoraid on campus where he would make a space available for them. 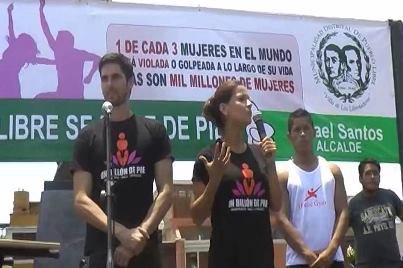 In Lima, the Clitoraid team was led by Raelian Bishop, Marco Sevilla. The event "Un billón de pie" in the Peruvian capital city was organized by Peruvian actor, Jason Day. The celebration took place at the new "Alameda de la Integración" where a big stage welcomed both political celebrities like Mrs. Susana Villara, the Mayor of Lima and popular Peruvian actors like "La Chola Chabuca" and Denisse Dibós, and many others.

With tshirts, posters, flyers and the biggest, most notorious banner of all the event, Clitoraid created awareness for its cause among the Peruvian people who reacted positively. The Clitoraid Peruvian team danced happily with all the people present. Bishop Sevilla reflected on this peaceful experience in this way: "If every man or woman thought first of dancing before reacting with violence to any situation, the world would know peace". 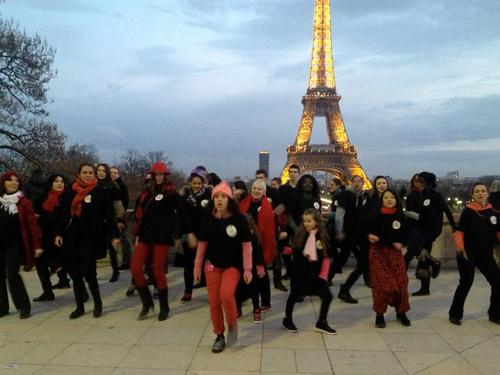 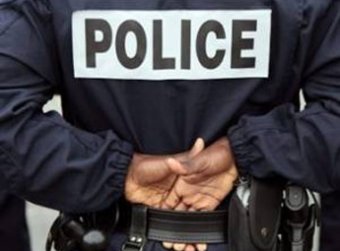 In the French capital, Clitoraid supporters met on the famous Beaubourg Town Square to dance and stand up against violence by handing out Clitoraid flyers and dancing with the One Billion Rising group organizing the event. Suddenly, Clitoraid representatives were summoned to leave by the organizers alluding to Clitoraid's association with the Raelian philosophy as if a crime had been committed. The Paris Clitoraid leader was at a loss for words in front of the hateful and agressive demeanor of the head of the One Billion Rising event and the police that supported their stance. France has already been denounced by the European Community for its discriminatory policy with minority religions that often rubs off on its citizens. But who would expect such reaction at One Billion Rising, an event that precisely rises against hatred and violence! A police investigation is underway to bring to justice these citizens and police officers with illegal discriminating attitudes toward our peaceful, humanitarian cause. 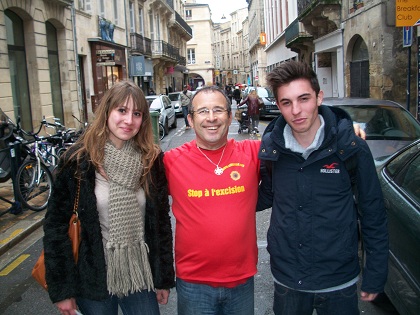 Hervé Bibens, a retired French fireman who has spent a good part of his recent retirement fundraising for Clitoraid and traveling to Africa to help in the construction of Clitoraid's Hospital, decided to stand up against the violence done to women by going to Victory Square and promote Clitoraid's cause. Noticing a storm coming, he launched a flash mob ahead of the officially scheduled One Billion Rising event which ended up being canceled because of the rain. The young Bordeaux citizens on the plaza readily partook in the dance with Hervé despite the absence of music! Many Clitoraid flyers were handed out by Herve and those who spontaneously joined him. 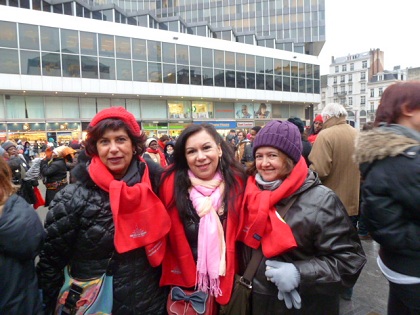 Brussels, Belgium
Naella Des Sables represented Clitoraid on the Money Town Square as she joined the One Billion Rising Crowd. Two women's associations noticed her presence and approached her to see about working together since some of the women they cater to are FGM victims. 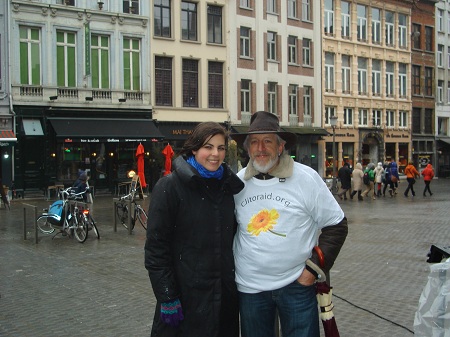 The Clitoraid Dutch-Belgian team led by Monica Marcucci, head of Clitoraid in Belgium joined One Billion Rising in the Suikerrui district of Antwerp. The event was organized by An Thys who was touched to see representatives of Clitoraid there. She has linked Clitoraid's website to their facebook page.
"Although it was a freezing cold day, the outcome was really warm and positive. One contact worth noting is the one with a Portuguese girl, currently studying social courses, who wants to go to Africa after finishing her studies. She did not know exactly where. When she heard about the actions and goals of Clitoraid, she said she finally found her destination: Bobodialousso, Burkina Faso where Clitoraid's hospital is being built. She hopes to be able to volunteer there". reported Karlien Kennis, volunteer. 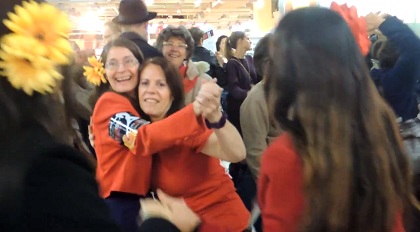 Emilie Garault head of Clitoraid Switzerland, invited her group to come and support One Billion Rising in Geneva, an event that spread through the city's public places, streets and the shopping centers. One of the organizers, Antonella Notari, head of the Foundation Womanity began to dance and was soon accompanied by women, joined by men, children and elderly people. The message spread like wildfire and the spirit of peace and sister/brotherhood reigned among the 200 people or more present. The Clitoraid supporters became acquainted with the participants, spontaneously exchanged contact info as if to say, this is it, we are at the start of an inevitable process of worldwide unity in peace and love. May we continue to rise while singing, dancing and laughing every day, every moment!